You may recall when Ram Trucks successfully set a Guinness World Record™ for the longest parade of trucks during the three-day ACM Party for a Cause® Festival. It may not seem like it but it’s been a year and this year’s festival is right around the corner.

The fourth ACM Party for a Cause® Festival will take place April 1-3, 2016, at the Las Vegas Festival Grounds.

The Academy of Country Music and Ram Trucks are continuing their partnership and the Ram Trucks Main Stage will be a focus for many headline artists such as Carrie Underwood, Dierks Bentley and Kenny Chesney.

In addition to the Ram Trucks Main Stage, country music fans will have an opportunity to participate in the Ram Ride & Drive Test Track. Jump in the passenger seat as a professional driver steers you through an obstacle course that puts the truck through a series of capability challenges.

Raminator will be in attendance again this year, wowing attendees with car-crushing demonstrations. And for those who want to get up close and personal with the monster truck, there will be photo opportunities and autographs available as well. 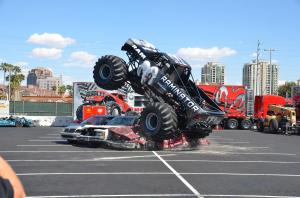 Ticket proceeds from the festival benefit ACM Lifting Lives, the Academy’s charitable arm whose mission is to help others through music. Anyone interested in attending the event can purchase either single or three-day passes at www.ticketmaster.com.

Visit ACMcountry.com/pfac for more information about the festival, including a full lineup of artists performing on the Ram Trucks Main Stage and throughout the event.