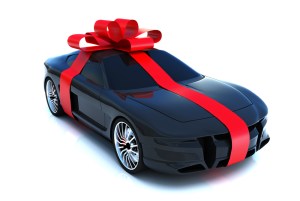 Picture this – it’s Christmas morning (much like today). It’s just you and you’re new wife of about 10 weeks. A nice, quiet Christmas this year.

Gifts are exchanged when out of nowhere she tells you her final gift to you was a bit too heavy for her to carry up the stairs. So you go down to the garage to get it yourself, swing open the garage door and…

A bright, shiny new car with a big, red bow across the hood.

About now you’re thinking, “Riiiiight, that only happens on TV. Especially in all those commercials they run constantly through the holidays.”

Except it really does happen. How do I know? Because ten years ago, I was the “new wife” in the scenario I just described. It took a little luck, a little white lie and some help from a couple friends, but I surprised my husband with a new car for Christmas that year.

Looking for some statistics on exactly how often that does happen, I had some difficulty finding any cold, hard facts. I did find one item that suggested 17 percent of Americans have gifted a vehicle. That seemed very high when I first read it, but when I began to consider parents giving cars to their kids and spouses surprising one another, and the fact that it included both new and used…well, maybe it isn’t so far off after all.

The key to gifting a vehicle is being smart about it. You don’t exactly want it be the gift that keeps on giving – and by that, I mean draining your bank account every month for five years while you make payments. On the flip side, you don’t have to slap down thousands of dollars in cash either.

As I said before, I had some luck when I pulled off the “big red bow” event. We had been shopping for a car since before we got married, so I knew what we wanted, I knew what we could afford and I found the perfect match for both criteria.

Since I don’t have an extra $20,000 sitting around, financing was the only payment option and that all worked out the way I needed it to as well. Yes, I would be making payments, but they were affordable and I could even add in a little extra each month to pay it off early.

Ten years later he still drives that old car. It’s probably time for a new one again, but I think I’m retired from the car-gifting gig. Maybe his new Santa can hook him up next time around.