I have a friend who gets press cars nearly every week. Sometimes the cars are pretty cool. Sometimes not so much. In any case, I’ve been patiently waiting and FINALLY he got something I was excited about. A 2015 Dodge Challenger 6.4L Scat Pack. Phantom Black. Nice.

Now all I needed to do was finagle a ride or two while he had the car.

When he found out he was getting a Scat Pack, he asked me about it. Not normally one to keep quiet about such things, this time I simply said, “You’ll like it.” Further attempts to gain information from me were met with the same reply. (In retrospect, I realize this was not the most charming way to earn the joyride I so deeply wanted.)

To this I chuckled and said, “It is a heavy car.” And it was on. I thought I would never hear the end of it. 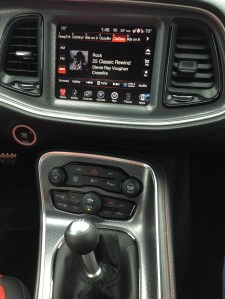 Then, he drove the car.

Suddenly, the weight was less of an issue. Instead, he told me how much he enjoyed driving this car. He liked the interior—both the spaciousness and the quality. The technology is advanced, yet easy to use. (Uconnect is definitely one of his new favorite toys.) Everything is available at the touch of a button without being overly complicated.

The Challenger Scat Pack doesn’t make apologies for what it is. Nor does it pretend to be something it’s not. It is a big, heavy, powerful car and it handles as such. Carrying 52 percent of its weight in the front, it does require a skilled driver. As my friend put it, you can’t be lazy when you’re driving it or you’ll find yourself in trouble.

Of course, a skilled driver in a controlled environment can also have some serious fun in this car. Spin outs, 360s, a little bit of showboating … entertaining and impressive to those watching and, of course, all in good fun.

The look of Phantom Black is menacing. Put together with the throaty exhaust note and this car got plenty of attention. I have to admit one of my favorite parts about riding in the car was watching all of the other American muscle cars slowly roll up next to us at stoplights. It was great to look over and see the other drivers checking out the car. (I swear I’ve never seen as many Camaros as I did the afternoon we were out driving the Scat.) Maybe a little less so when it was a member of law enforcement doing the same.