Buying your first car can feel like a rite of passage, and that special moment is something many of us get to enjoy. With 289 million vehicles on the road and 17 million vehicles bought each year, it’s clear America is a car-loving country. From car clubs where enthusiasts can congregate and compare rides to racetracks to watch the latest NASCAR, IndyCar and other races, there’s plenty to keep car-lovers happy.

At Chrysler Capital, we’re pretty keen on vehicles ourselves, and we’ve researched the number of registered vehicles, racetracks, racetrack experiences and events to reveal the best states for car enthusiasts across the country.

So, let’s see where the car – and car enthusiast – are truly king. 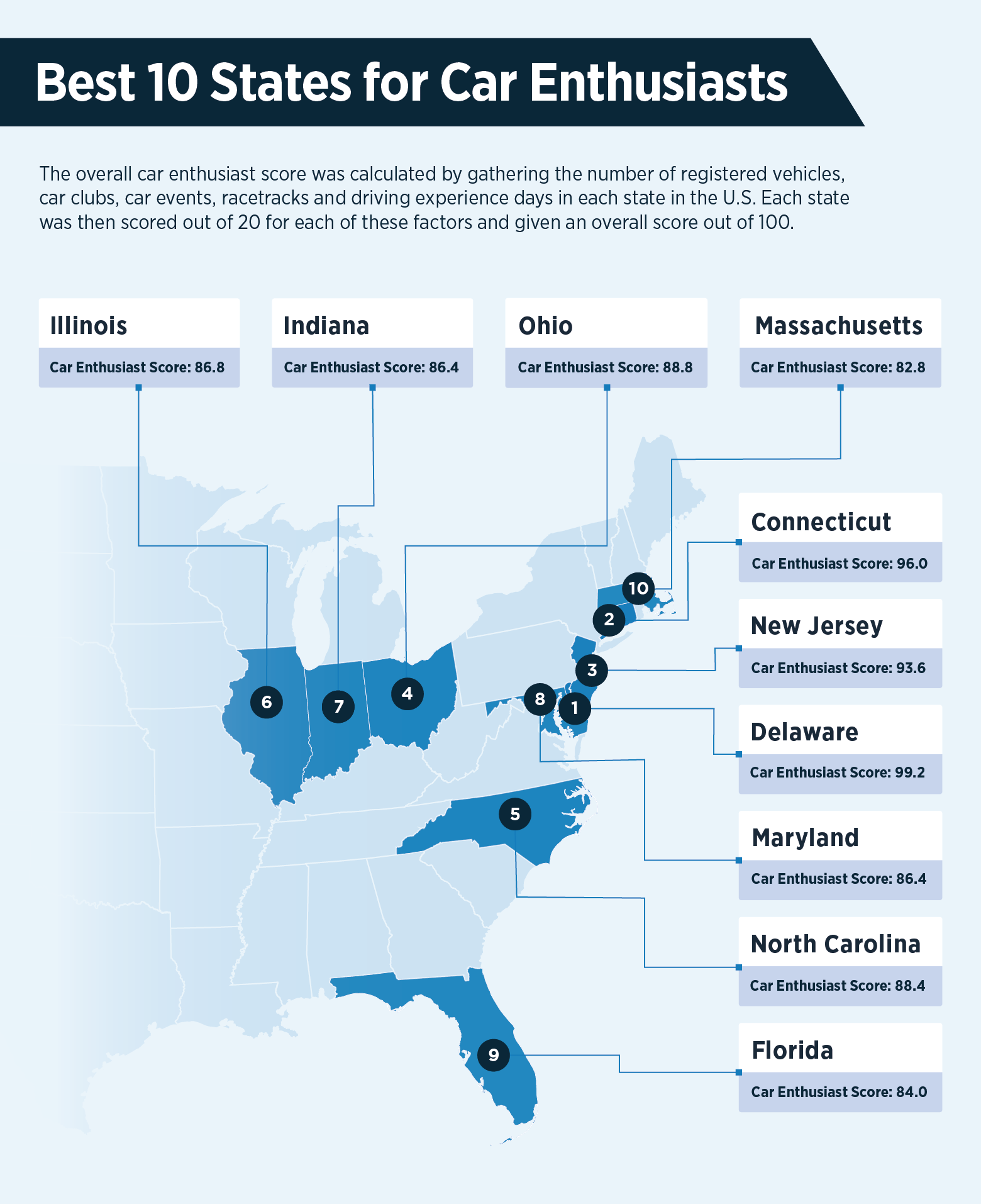 Interestingly, most of the best states for car enthusiasts are found on the East Coast. (Don’t worry if you’re on the West Coast or in another part of the country, we’ll get to that later!) The very best state was found to be Delaware, which has a whopping overall Car Enthusiast Score of 99.2/100!

Partly due to the compact size of the state, car enthusiasts can find a car club every 100 square miles, so they won’t have to drive far to meet up with like-minded friends. There’s also a car event every 311 square miles, a racetrack and racetrack experience every 1,244 square miles, and just 2.4 people for every vehicle in the state.

In second place and not far behind Delaware is Connecticut, which has a very healthy Car Enthusiast Score, too, of 96.0/100.

Highlights for the automobile-enthused include a car club and car club event every 231 square miles and 396 square miles, respectively. There’s also a racetrack experience to enjoy every 1,848 square miles.

Third across the finish line for best states overall is New Jersey. The state claims a lofty Car Enthusiast Score of 93.6/100 and is particularly appealing to the sociable enthusiast. It offers them a car club every 148 square miles and a car event every 165 square miles.

When it comes to the greatest numbers of racetracks, you can’t beat sunny Florida which has an impressive total of 24 tracks. If you’re a fan of NASCAR, the Homestead-Miami Speedway is well worth a visit. Another great option to consider is a trip to the Palm Beach International Raceway, which offers a range of tracks including a quarter mile drag strip, a two-mile road course, plus kart and mud racing tracks.

Now comes some great news for car enthusiasts on the West Coast. California, which also boasts plenty of fine weather for race days, has the second highest number of racetracks in the country with a total of 22. If you want to watch a drag race or motocross competition, or even see what your own car can do, then the Sacramento Raceway could be the place for you. One of the longest circuits in the U.S. also sits in California; the Thunderhill Raceway Park, located in Glenn County. 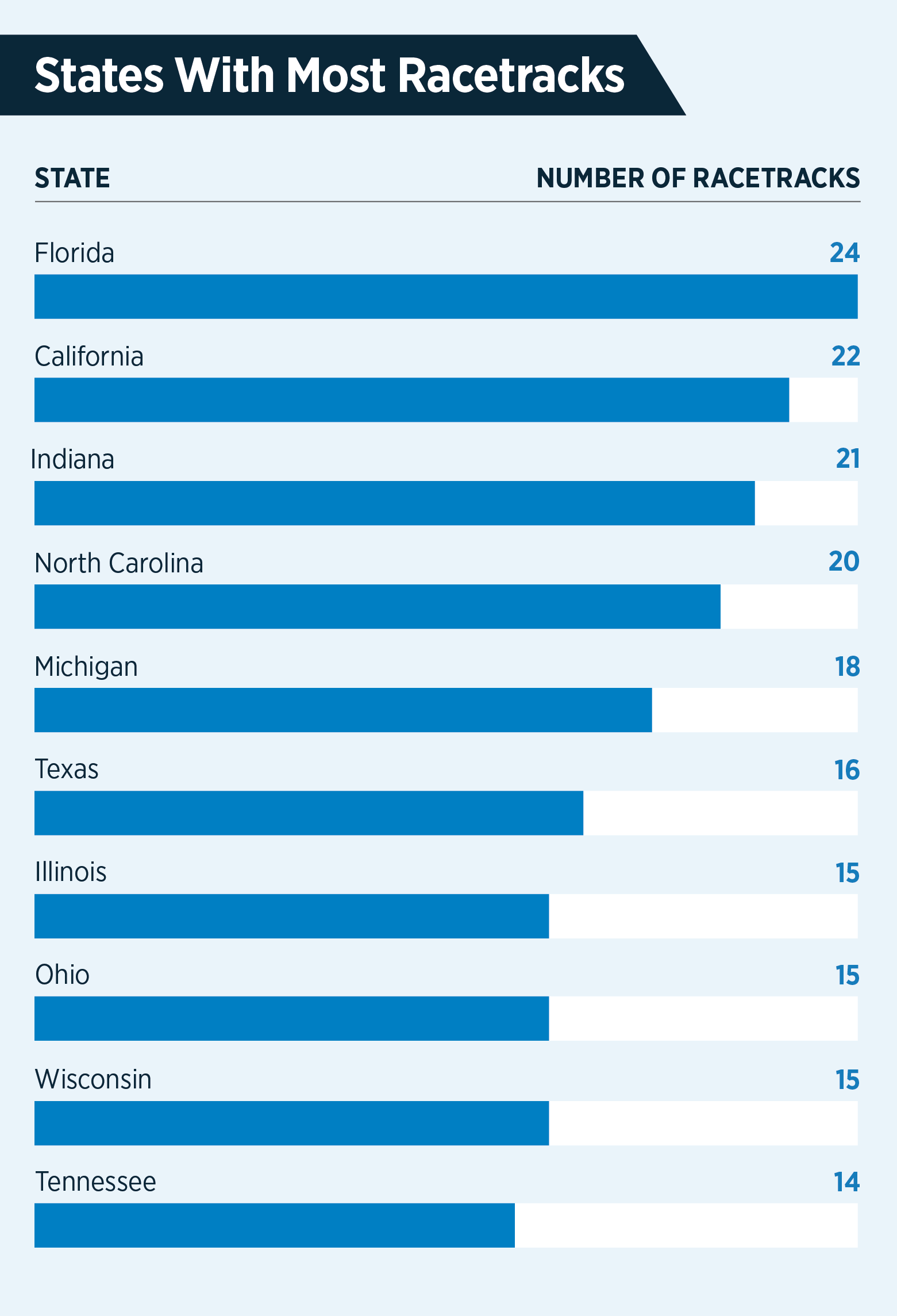 After Florida and California comes Indiana which boasts some 21 racetracks within its state lines. Among them is Indianapolis Motor Speedway, the former home of the United States Grand Prix. First constructed in 1909, it offers an exciting track that hosts events including the IndyCar and NASCAR series and more. 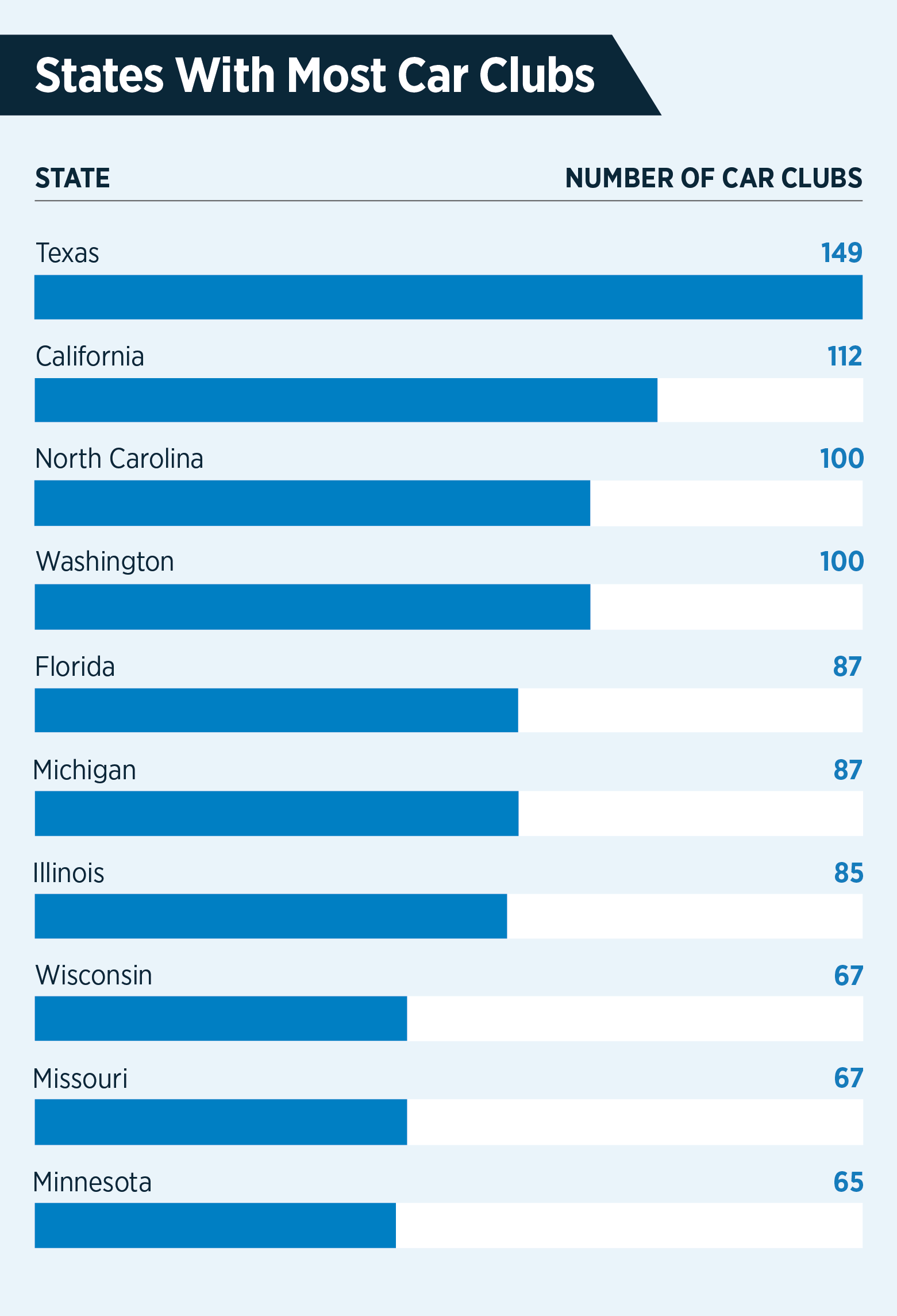 Now, let’s talk about car clubs a little more. Often formed along the lines of vehicle type, brand or other common interest, they are perhaps the perfect way to celebrate the automobile in all its glory. And it is Texas, according to our findings, that enjoys this aspect of car culture the most. The Southern state was found to have some 149 clubs devoted to cars. Next on the list, and a little way behind, is California, with 112, followed by North Carolina and Washington state, each with a round 100.

All states were ranked out of 20 for each category (registered vehicles, number of clubs, events, racetracks and experience days) and then given an overall score out of 100.