The United States is a world-leading car manufacturer, home to some of the most loved and recognizable brands, producing over 8.8 million vehicles a year. The country’s $82 billion automotive industry has also created a nation of car lovers.

In fact, as of 2020, there were over 275 million vehicles registered on U.S. roads, an increase of over 10% from 2010. But when it comes to specific models and vehicle types, what brands and styles are piquing the nation’s interest the most?

We have analyzed Google search volume data for 80 models and popular types of vehicles to reveal the United States’ most searched for cars. 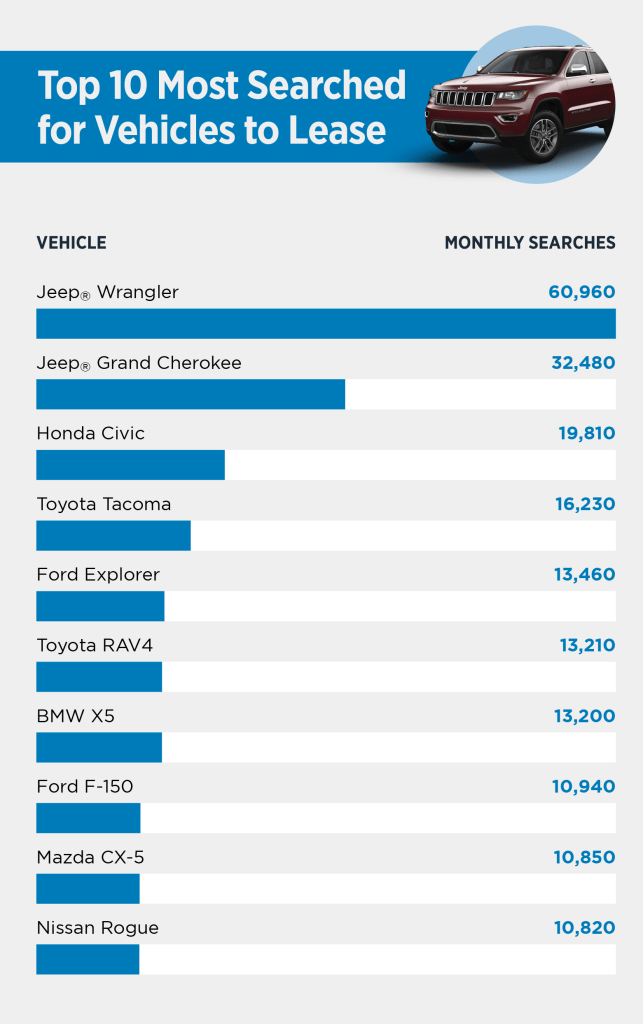 The top 10 most searched for vehicles

According to our data, the most searched for car in the country is the Jeep® Wrangler, with almost 167,000 searches on average per month. In production since 1986, the Jeep Wrangler is a well-known and much-loved SUV available in both compact and mid-sized variations. Since launching over 36 years ago, the Jeep Wrangler has grown in popularity with various model types including the YJ, JK, and JL. In 2021, over 200,000 Jeep Wrangler vehicles were sold in the U.S. – an increase of over 115% since 2010.

The second most searched vehicle is Toyota’s popular pickup truck, the Tacoma. The model has been manufactured since 1995 and in 2021 over 250,000 vehicles were sold in the United States. Toyota also took the third most searched for model with the 4Runner, which averaged over 69,000 searches per month.

Other popular models being searched for were the Honda Civic, Ford F-150, and Jeep Grand Cherokee, which all received over 57,000 average searches each month. 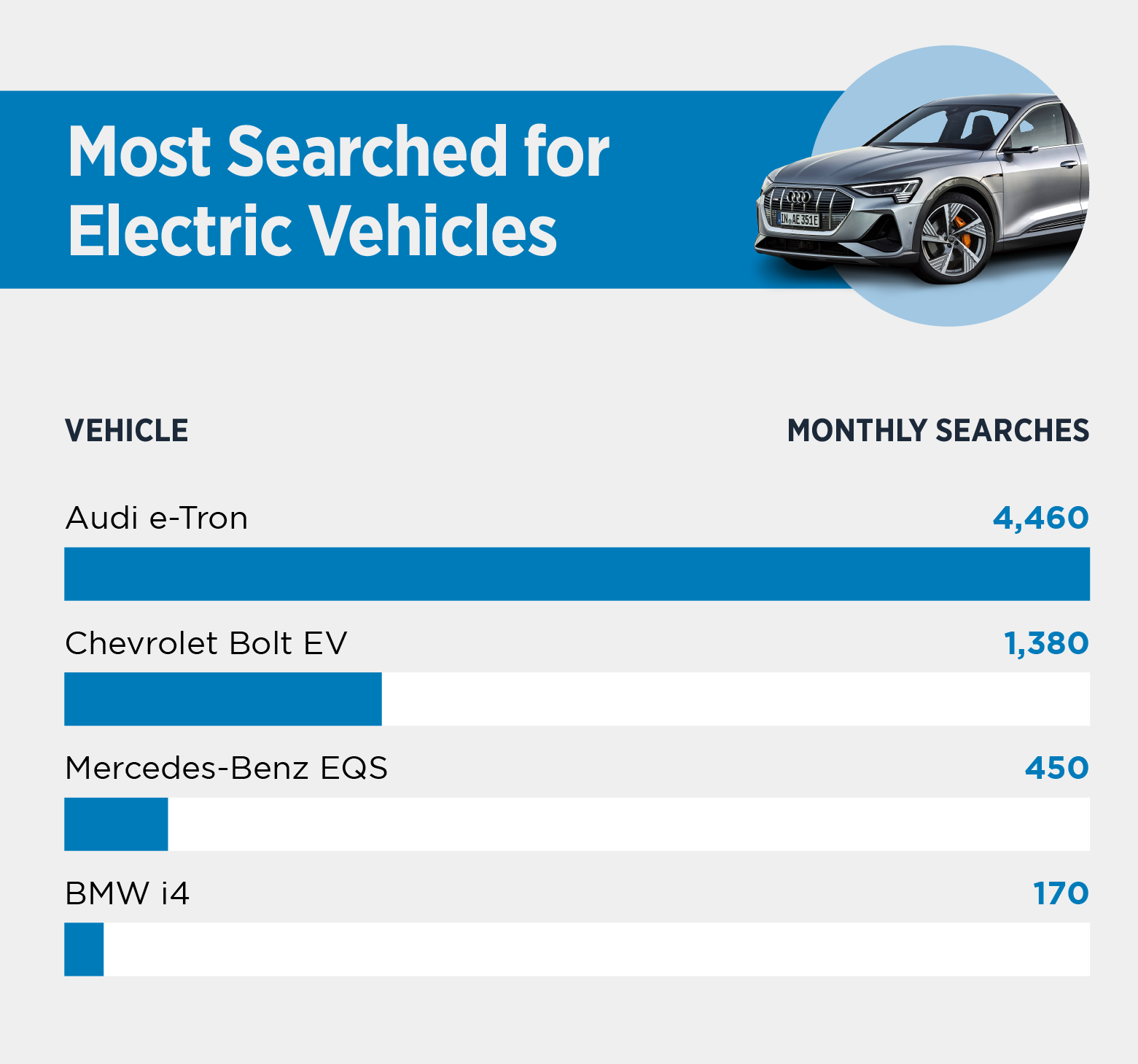 The most searched for electric vehicles

According to our search volume data, the electric car model piquing the nation’s interest the most is Audi’s e-Tron, with almost 4,500 searches a month. The second most popular model is Chevrolet’s Bolt EV. The model, which has recently been recalled to address battery issues, received an average of 1,380 searches per month. 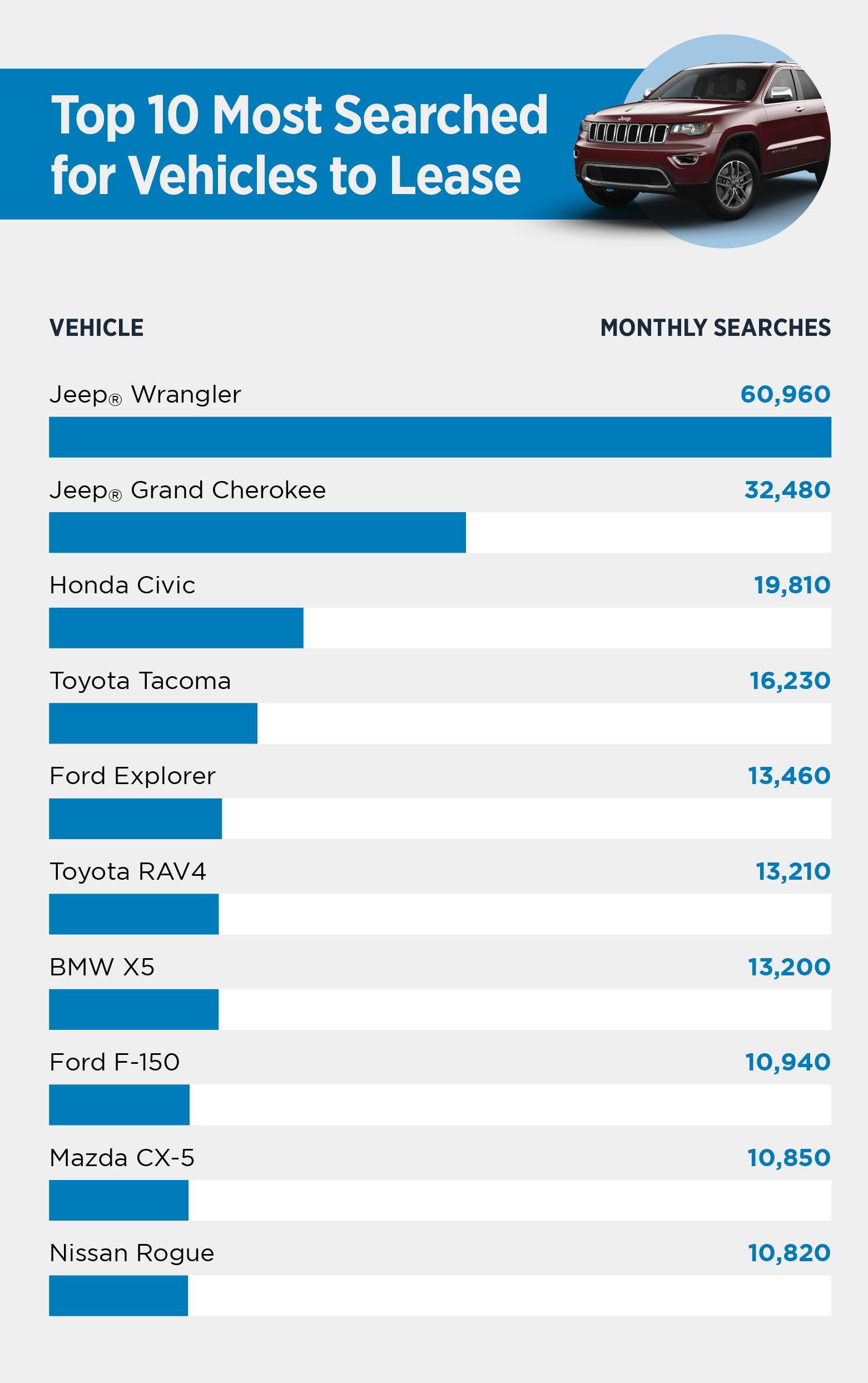 Top 10 most searched for car models to lease

There are many benefits to leasing a car, from a potentially lower down payment and monthly costs to always having the latest model. Millions of Americans drive a leased vehicle each year, but which models are they searching for the most?

We analyzed the search volume for the term “car model lease” and according to our data, the model that topped the list was yet again the Jeep Wrangler. In a close second, it’s the popular Jeep Grand Cherokee with almost 32,500 searches a month. 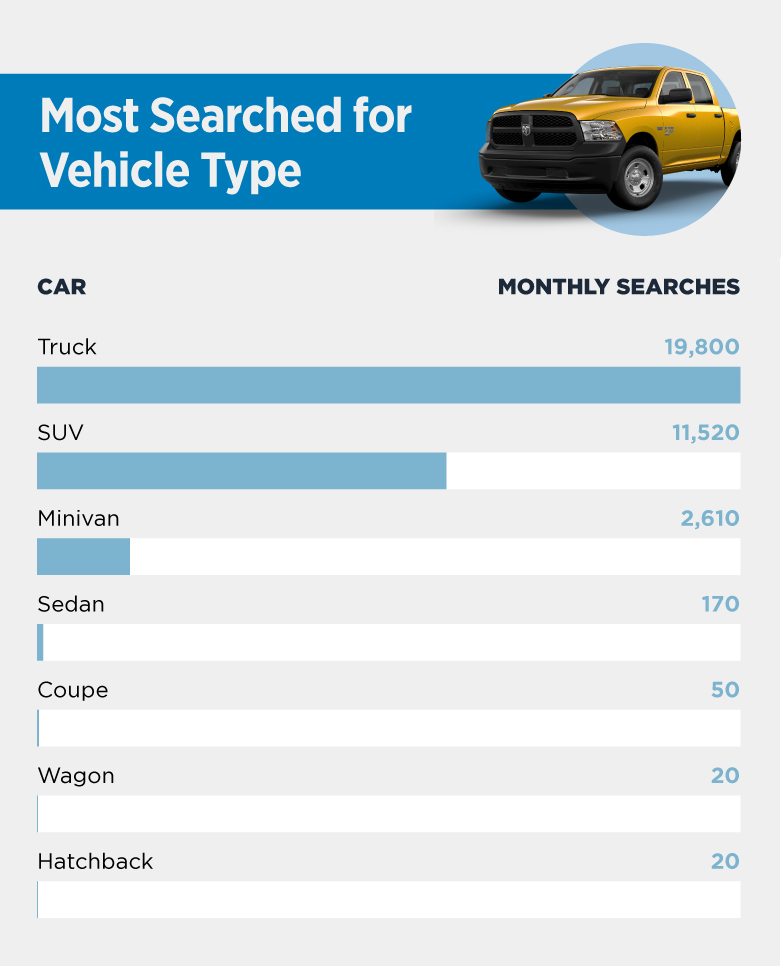 Most searched for vehicle type

The United States is a truck-loving nation, with pickup trucks accounting for two-thirds of truck sales across the country, so it’s no surprise that trucks top the list when it comes to the most searched for vehicle types.

The seed list of cars was compiled of “The most popular upcoming cars” from AutoTrader, “Future cars” from US News, and Chrysler Capital’s full vehicle database. Search volume for each term was pulled on 10/12/21.