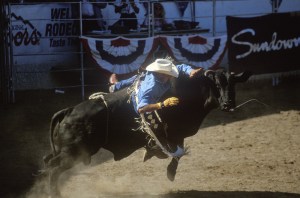 Say “rodeo” to the average, everyday person on the street and the image that immediately comes to almost every person’s mind is bull riding. Of course it is. It’s fast-paced and exciting and dangerous. And you never really know what you’re going to get.

Neither do the bull riders, who are all too familiar with the saying, “It’s not IF you get hurt, it’s WHEN.” Bull riders like Bobby Welsh and Steve Woolsey, who will be competing against one another next month at the Ram National Circuit Finals Rodeo, understand the variables, the rush of adrenaline and who holds the advantage in every ride (the bull, naturally).

I’ve watched a lot of riders get bucked off and some make it through to the bell. I don’t think there’s anything that could tear my eyes away from that bull. Well before they even open the gate, my eyes are glued to the animal and the rider tightening and securing the rope, ensuring the best possible grip.

When he’s ready, if you’re watching closely, you’ll see the rider give a nod and away they go. Some of the riders can make it look almost easy. Almost. Keeping their free hand high to be sure not to touch either themselves or the bull (avoiding an automatic zero score), they move in stride with the bull’s movements and when the eight-second bell sounds they loosen their grip, jump off and stroll out of the arena. The judges are quick to hand over their scores for a successful ride. A good score is generally considered to be in the 90s. A perfect score is 100, with both the rider and the animal each having the capability of earning up to 50 points. In the history of the PRCA, only one perfect score has ever been awarded. 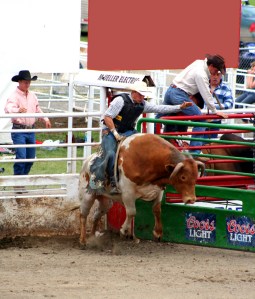 In rare instances a rider is granted a re-ride. What is a re-ride, you ask? Good question. I’d been to several rodeos and never seen one. Then…BAM! The last rodeo I attended had two in one night! To put it very simply, when a bull’s performance is one that the judges determine is not up to par, therefore unjustly and negatively impacting the rider’s score, the rider can be offered a “do-over,” allowing him a chance to improve his score.

On the night I was there, one bull simply would not exit the gate and the second bull left the gate, but then went back into the stall as he was bucking, causing the rider to slam against the side of the stall during his ride. (The rider was not injured.) Both riders were offered re-rides, both accepted and one improved his score significantly. He walked away with second place that evening.

I think the rodeo clown took what several of us were thinking and described it best when he said, “It’s just you and 1,800 pounds of hoppin’ hamburger and you gotta get back on and do it all over again? Well, ain’t that a trip…”

Other top bull riders joining Welsh and Woolsey at the Ram National Circuit Finals Rodeo next month in Oklahoma City include Trevor Kastner, Wesley Silcox, Brett Stall and Cody Teel. First place will walk away with a $20,000 voucher for a new Ram Truck. Not too shabby for an eight-second ride, huh?