I tend to be what one might call an “enthusiastic” driver.

Maybe I secretly yearn to be a racecar driver. More likely, I’ve never really gotten past the limit-testing days of my teenage years.

In any case, I was up bright and early Saturday, driving north on the I-35 corridor in North Texas. My “travel buddies” on this particular occasion were an American muscle car and a high-end German import and we all seemed fairly content in our little pack.

Then, out of nowhere (it was an entrance ramp, actually, but that has so much less dramatic flair) came a streaking silver bullet. I glanced left to see what this turbo-boosted, super-sonic, shiny piece of machinery could possibly be. 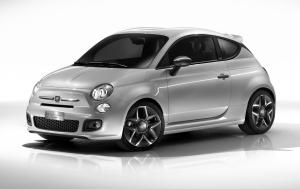 I looked once. I looked twice. I blinked a couple times and looked a third time. A FIAT 500? It couldn’t be.

At the very least, I thought it must be an Abarth. But no. It was just a cute, little FIAT 500.

The owner of the German import didn’t seem pleased by the thought of being passed up by a cute, fun, Italian (not to mention efficient and economical) car. He immediately sped up, but wound up reaching his freeway exit before he was able to catch the frisky little FIAT.

Does that mean he lost by default? I think it does. In retrospect, this makes me laugh a little.

I can’t lie. The exchange ignited my competitive nature as well. It wasn’t enough to make me want to try and outrun the little guy, but I really wanted to keep up with him. And just keeping him in my line of sight was challenging enough because he was moving!

I did end up losing the FIAT in the Mix-master when he zigged and I had to zag. (For the vast majority of you who have never driven in Dallas, this really isn’t as bad as it sounds. Except during rush hour. And when there’s a Mavs game. Or something is going on downtown. Okay…maybe it is as bad as it sounds.) Obviously my mid-sized SUV was also not up to the challenge set forth by the masterful driver and his zippy little FIAT 500.

Days later I still shake my head and smile. It stung a bit, being outpaced by the feisty little FIAT. But I have a newfound respect for what I previously thought of as a cute little “city car.”