Four doors and four wheels – that’s where the similarities end. The updated 2015 Dodge Charger is like no other sedan in the American auto market.

From the “entry-level” Charger SE, all the way up to the powerful Charger SRT Hellcat, the iconic edginess of the only four-door muscle car in the U.S. will blow your mind.

At a starting MSRP of $64,900 (including $1,700 gas-guzzler tax and $995 destination charge), the highly anticipated 2015 Dodge Charger SRT Hellcat owns the title of quickest, fastest and most powerful sedan.

It’s more like the car that re-wrote the rulebook and then left tread marks all over it while breaking every last rule in it.

If 707 horsepower is a little more than you need, there are eight other Charger models from which to choose. 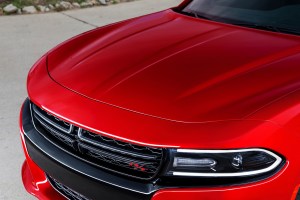 Take the Charger R/T, for example. At a starting MSRP of $33,990, including the $995 destination charge, it’s the most inexpensive V-8 sedan in America. But affordability doesn’t mean it’s short on power or the latest technology. Check out just some of what the Charger R/T has to offer:

Or go for the Charger SXT AWD, also at a starting MSRP of $33,990, including the $995 destination charge. With all the style and standard features of the rear-wheel-drive Charger SXT, plus an active transfer case with front-axle disconnect to save fuel when AWD is unnecessary, you can’t go wrong when you need all-season performance.

Have you picked your favorite yet?

Watch for most of the 2015 Charger models rolling into dealerships before the end of the year. The 2015 Dodge Charger SRT Hellcat is scheduled to start production during the first quarter of 2015.