If you were to guess which state sold the most hybrid vehicles, and you said California, you would be correct.

If you were to guess which state sold the most minivans, and you said California, you would be correct again. 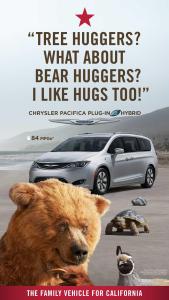 So, would it surprise you to discover that the Chrysler brand is lobbying for the Chrysler Pacifica Plug-in Hybrid, the only hybrid minivan in the United States, to be named the Official Family Vehicle for California? I didn’t think so.

Other well-known state symbols, like the grizzly bear, valley quail, desert tortoise and serpentine (it’s a rock), act as lobbyists in support of the Pacifica for the brand’s multi-media campaign.

“Forty percent of all hybrids are sold in the state of California — it’s also the biggest minivan market in the country — so it makes perfect sense that we say the Chrysler Pacifica Hybrid is the ‘Official Family Vehicle for California,’” said Tim Kuniskis, Head of Passenger Car Brands – Dodge, SRT®, Chrysler and FIAT®, FCA – North America. 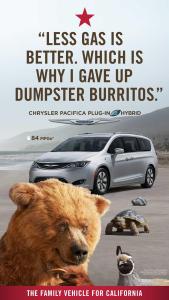 As Kuniskis further pointed out, it isn’t just the minivan’s marketability that makes it a solid representative for the state. “With 84 miles MPGe in electric-only mode, 33 miles of all-electric range and seating for seven, the Chrysler Pacifica Plug-in Hybrid minivan is hands-down the most fuel-efficient family vehicle. Aligning the minivan with other easily identifiable California state symbols in a fun, engaging way is rooted in the vehicle’s fuel efficiency, functionality, technology and its recognition as the most awarded minivan of 2016 and 2017.”

Bear with us while we rock the boat, ruffle our feathers, come out of our shell and make a bid to join the other California state symbols.