Regardless of the recent upward trend, we are still paying significantly less than just three years ago, when on New Year’s Day 2014 it was at $3.29. And remarkably less than in June 2008, when gas prices soared over $4.00 per gallon, hitting an all-time high of $4.11 that year in July.

Check out this chart published by AAA earlier this month, comparing 2014 prices to today. 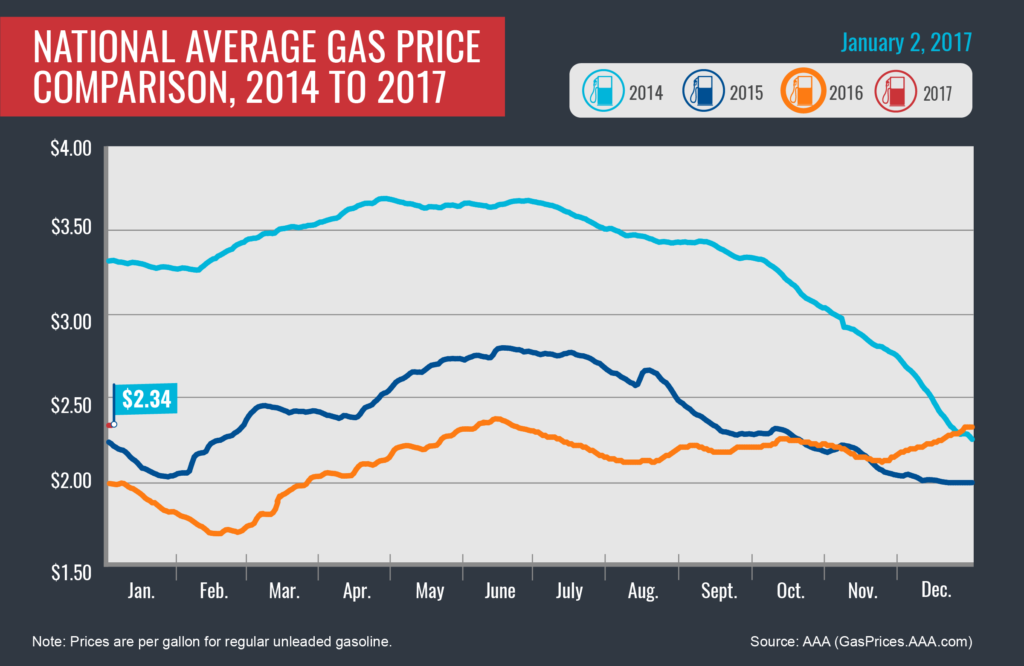 So, what do the steadily increasing prices mean? Are we on track to hit more record highs? How will this impact our economy?

According to estimations recently released by the U.S. Energy Information Administration (EIA), the first to release expectations that include 2018, the future looks bright — with a 2018 estimated average of $2.41, just under the 2015 average of $2.43.

Exactly how future gas prices will impact the economy is tough to say. I don’t have an economy background, nor do I have a crystal ball, so I would be remiss to even guess.

What I do know is fuel economy in most vehicles is improving. The Corporate Average Fuel Economy (CAFE) standards that went into effect in 2012 have manufacturer’s working overtime to meet the 2025 requirement of a 54.5 mpg fleet-wide average. Take, for example, the following:

While the raw numbers may not be overwhelmingly convincing, they represent as much as a 25 percent increase in fuel efficiency in the last six years. If, over the next six years, these same vehicles were to achieve another 25 percent gain, the average highway mpg of these four vehicles will be 36.6 – a staggering difference from the 2008 average of 23.8.

Is this enough to reach the CAFE requirement of 54.5 mpg by 2025? Good question and not one I can answer.

Here’s what I do know:

So, overall, we’ll be paying less for gas while achieving better fuel economy?